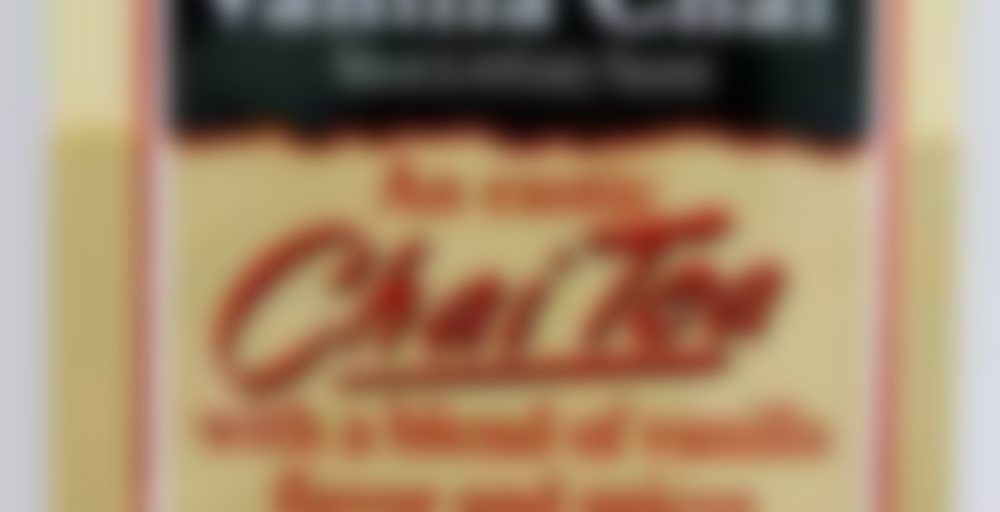 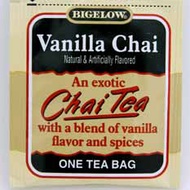 with 118 Ratings Rate this tea Rate This Tea

Chai is a delightful blend of tea and exotic spices. It is often brewed with milk, which gives Chai a wonderful, creamy characteristic. In Bigelow Vanilla Chai we have added the flavor of vanilla, offering you a whole new dimension in Chai.

Comfort in a cup. After all the teas that I have sampled, this one tea remains my favorite. The vanilla and chai are in perfect harmony. Had this tea two ways tonight: plain and traditional chai method on stovetop. Yummy both ways:)
I am slowly getting back into wanting hot tea. It got so darn hot here this summer that the thought of hot tea turned me off (it did not help that I got sick drinking PG Tips this summer…I really hate that too, My tips no longer appeal to me…sad) but I am slowly emerging back into the tea scene. But my tastes seemed to have changed. The teas that I liked iced, I don’t like hot. I guess that is normal but I wish I had realized that before I placed my last GM order…sigh…and I don’t want milk in my tea anymore…bad memories…another sigh…

Hopefully your bad tea memories will fade with time.

Thank you VegTea. I am hoping for that too!

I bought this tea because my nephew Brennan said it was good and he thought I would like it. I was eager to cup this despite it being at least partially artificially flavored.

In my first cup I added a little skim milk. To be honest, even the small amount of milk seemed to hide flavors, although I thought I tasted vanilla and other Chai spices. My second cup was steeped without milk, per info below. I did taste a decent black tea base, vanilla & cinnamon, and perhaps cardamon in the background.

It was a decent cup of tea, but I did taste the artificial flavoring in this blend and it really distracted me, & disappointed me-even though I was expecting it. :// Hopefully, this tea will be better cold brewed.

This is the tea my nephew liked. It’s a decent tea. I plan on cold brewing it tonight, and maybe post another cold brew review this weekend or early next week.

Haha, I have a ton of that stuff somewhere I don’t know what to do with. Even back before I discovered loose tea it was too artificially-flavored for my liking. I never thought to try cold-brewing it though, hm.

I’ve read a lot of your reviews and think you’re an excellent writer. Love the way you write of tea and it’s connections in your life. Brought back some memories of mine. Wish you were still around posting.

Thank you quietcreation! That means a lot to me! Well, in late Dec 2016, I changed my profile pic, and I do plan on posting tea reviews again soon. :)

The third bagged tea of the day yesterday. My dad and I had teas while my mom was at a finance meeting in the evening (she’s the office manager/accountant at her workplace). He boiled the water, started a cup for himself, then asked me if I wanted anything while the water was hot. Yay for tea with dad!

So I picked this to have with milk and a touch of honey because for some odd reason honey vanilla chai sounded good then. I knew I was going to add milk to it so I steeped it the maximum recommended time. I got a mug of creamy honey spiced black tea. All of those things vaguely. But sweet and desserty so I enjoyed sipping while studying. He watched investment/finance channel shows then a vintage/older (think 80s)/sports cars auction show. Dads lol.

I’m not rating this tea right now because I made it with milk and honey and did not get a true sense of what the tea itself tasted like. But it would have definitely fallen within the nice bagged tea range this way.

Mmmm. This is my ideal dessert tea. Plain, although I keep meaning to try it with milk.

Sipping and reading Watchmen. Checked it out of my college’s library. This is one thick graphic novel.

Boiling 4 min, 0 sec
Yours I Like This
5 likes
9 comments
Edit

a good read though, and different than the movie

True. I own both the movie and the ‘novel’ – so different, but both enjoyable. Except I didn’t like the black freighter stories.

Never saw the movie, actually. I thought everyone was apparently pretty impressed with how true the movie was to the book?

I never see movies unless my friend comes over from the island and physically drags me to the theatre. I am a social recluse.

The end is extremely phenomenally different. But it was a good choice, I think.

Aaah. I’ll have to rent it someday.

Glad to hear that the Bigelow Vanilla Chai is being enjoyed along with a good book!

Thanks for the mention,

apparently that was the first comicbook to be awarded a “Hugo” prize for science fiction 1988. The rest of the literary world responded, “WHAT? You say that a COMICBOOK is one of the best books of the year??!!!!! WTF!”

Then I walked away from my plate and came back to find my cat licking the sugar off the top of my sugar cookie. sigh

Alright Thursday, bring it on!

Personally, I love that your 630 am includes a sugar cookie. Well done. :)

COL (chuckling out loud) Did kitty finish off the cookie with some chai?

@Nicole – apparently so did the cat!
@KS – I was just glad she didn’t go for the tea. I have more sugar cookies, but no more of these (surprisingly good) teabags!

For some reason I’m in the mood for chai today so I think I will indulge in a trio of chais, which are all bagged. This will be tea 1 of 3 in my lovely trio which will hopefully help me decide which one I like better and which I can live without.

For all intents and purposes, I will be brewing each tea the same way: 5 minutes, adding milk and sweetener. I’m not going to worry about the stovetop method because that is a lot of effort for a bagged tea.

The taste is primarily of vanilla with a hint of spice. It is very smooth, but it is hard to isolate the black tea base through the flavors. This is a good go-to bagged tea that is warm and comforting. However, it doesn’t smack you in the face to announce “I’m a chai!” This is much smoother than traditional chai with balanced, almost muted spices.

Oooh a flight of chais! Love that idea. I’m enjoying a blended iced chai now. SO worth the misery of heating milk in this hot house=D

That totally stinks your AC is out. The summer after my husband and I got married our AC went out and our landlord took his sweet time (almost a month, I believe) fixing it and we live in Texas. I feel your pain!

It reached 90 both yesterday and today w/ humidity at 70-85% (worse yesterday than today). While not unheard of, not typical of end of May in WI. I suggest including Mayan Chocolate Chai in your flight if you have it cuz… well… it’s my favorite hehe:)

I don’t have it, but I’m definitely considering a purchase sometime. It sounds pretty awesome!

It is- I’ve actually purposely avoided some awesome looking chais cuz I know I’d be completely biased and give it a pretty crappy rating at least in comparison to Mayan Chocolate.

I took a bag of this from the Travelling Teabox to have with breakfast this morning. The smell as it’s brewing is sweet and very vanilla-y – it actually reminded me of that Oregon Chai mix. Actually it tasted a fair bit like it too, though without all the sugary sweetness that made me dislike Oregan Chai’s stuff. I didn’t add anything other than some skim milk and really this tea doesn’t need it.

All in all I found it quite nice – and I may just grab all the remaining bags of vanilla chai from the teabox for myself. ;)

I thought the same thing about the milk — it doesn’t need it, really. Adding it sort of softens the flavor too much.

I am so glad that you like this tea. This is one of my all time favorites:)

Being a pretty diehard fan of anything chai, I was disappointed by this offering. I found it to be weak, and the spiciness that I love so much was not all that prevalent in this one. I normally like Bigelow pretty well, though, so I’m not too put off. Maybe next time I’ll try a longer steep or less water. We’ll see!

My little sister likes this tea.
When I have drank it, I have used two bags and left it in for a much longer steep.
This produced a much better result for me:)

I had this yesterday at work after I had found in the break room. It’s pretty good, but almost too sweet of a vanilla? Perhaps I wont put as much sugar and see if that would mellow the sweetness out a bit? All in all this was pretty yummy!