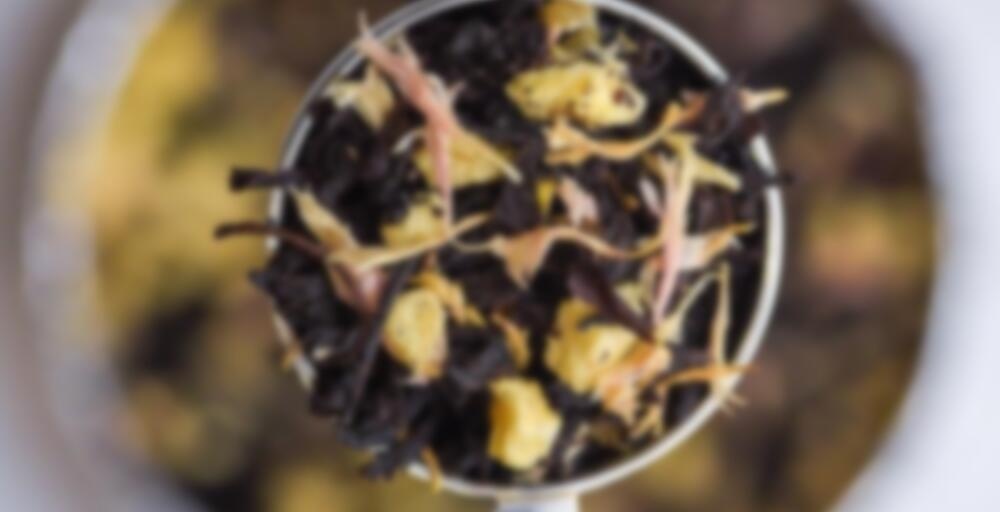 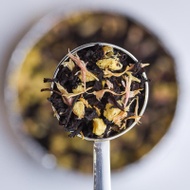 Our first black tea + peach pairing and a heavenly one indeed! This blend tastes like a classic cobbler straight from the oven… warm, gooey, sweet with that delightful gold brown crust.

I’m a total sucker for anything peach, so I was looking forward to this one! The dry leaf definitely smells very cobbler-y, with creamy pastry notes layered on top of the peach.

The brewed cup is a bit of a letdown, though. Hot, I’m just not getting much of anything beyond the Ceylon base. Once it cools, it reads as more of a peaches and cream flavor than peach cobbler. That base is super astringent, though! It nearly overwhelms all the other flavors.

Reading through the other reviews, it seems like this might be a fairly temperamental tea—others seem to have coaxed more flavor out of it. I could see it being quite tasty cold-brewed.

I won’t be keeping this from the TTB, but I’m glad I tried it.

A few different types of muffins came to mind for this prompt – an orange nutmeg muffin, a coffee + cinnamon muffin, and a spiced peach muffin. After looking through my tea list, I didn’t have any orange/nutmeg combos and ALL of my coffee-flavored teas also had chocolate. No chocolate in my coffee muffin, thank you. So I decided to go with the Spiced Peach Muffins from King Arthur Baking Company (https://www.kingarthurbaking.com/recipes/spiced-peach-muffins-recipe) and chose this tea for the prompt.

I’ve made a cup of this before for a friend of mine and remembered that it seemed pretty flavorless then, so I doubled up on the tea this time around. Honestly, it’s still not that flavorful. Plus, it curdled when I added milk. Is this secretly a hibiscus tea?? It doesn’t show on the ingredients list, but this cup was positively chewy. Ugh. Not a favorite for me, I’m afraid.

Homemade Advent Day 25
from AJRimmer
This one didn’t remind me of cobbler but had a nice and soft peaches-and-cream vibe to it. The ceylon base was maybe a little too strong compared to the peach and somewhat metallic and tannic. I really liked the peach and cream in this one just not the base tea. I always forget that I think B&B teas are more designed for milk and I need to try this one next time with milk. I started watching Queer Eye last week so this was my cup of tea that I drank while watching an episode.

Finished off a random packet of this that was included as a freebie when one of my orders got lost on its way over the pond and needed to be replaced.

It’s good but I feel like it needs a bit more of something. All of the flavors are quite light, and the overall taste is almost a bit bland. Mostly I’m getting a fairly authentic peach with some nice creaminess. I don’t taste anything resembling pastry. Ceylon base is a bit too metallic for my tastes, but it’s not bad.

So perhaps a bit too subtle on the flavoring for me. And more of a peaches & cream tea versus a peach cobbler IMO.

I’ve been curious about this one for a long time, and I finally ordered some during the last sale. The peach flavor could be stronger. It has a lovely creamy quality to it, more like a peach mousse than a cobbler. I don’t notice anything bready about it, but I love that creaminess. If the flavors were amped up, I’d love this tea. As it is, I enjoy it, but the flavors are a little too overshadowed by the black tea. And the black tea itself is the usual sort of average black tea B&B uses – not bad, just unremarkable.

Oooohh, you’re right — it is definitely more like a peach mousse than cobbler, which is interesting.

Yeah, I thought it was a fun twist on a pretty common flavor profile!

Second tea for March Mad(Hatter)ness! This is for the black tea round, going against Lupicia’s Cerisier.

This is another 2018 tea, still in a sealed 20g sampler packet. When I cut the packet open, it still had a delightful peach aroma, with a hint of something honey-esque on the nose, as well. Steeped 3.5g for 500ml 205F water for 3 minutes.

The steeped tea smells spot-on for the dry leaf, with that “peaches and honey” aroma; in fact, the honey aroma is even stronger, now. The tea is warm and inviting; the peach note tastes quite fresh rather than candy-like, and the sweetness that smells like honey is tasting closer to vanilla on the tongue. The base tea provides a bit of that “cobbler” feel as it is quite bready, and I’m getting a subtle spice note from it as well; it is a touch astrigent at the end of the sip and leaving a drying feeling settling over the tongue. I may have to try subsequent cups with a touch of honey to see if that curbs that sensation at all; I feel like milk might bulldoze the flavor too much, but it isn’t out of the question.

Compared to Cerisier, this is a tough call, because both teas did a really good job of portraying what they were going for and had spot on flavorings, and both were negatively affected by astringency and drying in the sip. I think Peach Cobbler is going to just edge out the competition though because Cerisier had the disadvantage of being on a decaf base; while that gives me a personal scheduling advantage of being able to drink it in the evenings when I have a bit more “time for tea” than I do during the work day, the downside is I get a slight metallic tinge to the flavor.

And the astringency actually mellowed out as my work thermos cooled down, so once that happened it became a very easy-sipping and pleasant cuppa!

So many teas have arrived from Cameron :)

This one didn’t have much flavour while it was hot, but as it cooled, the peach started to come forward and the subtlest hints of pastry in the background. The peach here is quite realistic, which I appreciate. The base tea is not my absolute favourite, but there’s no astringency, so it’s fairly enjoyable.

I don’t know that I’d order this one for myself, but I’m so grateful to have been able to try it. Thanks Cameron!

You’re so welcome! And thanks for the lovely package. :D

Straight up peaches and butter. Sounds gross, I know, but actually is so so delicious. This tea might be giving my other favourite Bird & Blend tea, Rhubarb + Custard, a serious run for its money…

How do you steep it? Mine doesn’t taste like anything. :(

Peach cobbler is peaches and butter, so I can see this sounding like something tasty.

@shae – Hot and straight. About two tsp/16 oz cup for like five minutes

Today it was good again :)

Nice black tea with weet notes of vanilla and peaches. Maybe way too sweet for me, but I don’t mind; it was good.

Indeed very vanilla and peaches, give me some fresh ones :)

I love a good, juicy peach!

I bought this in the Boxing Day sale. It’s one of those blends that I was happy to see pop up in the sale. Usually they have some limited time blends appear for the sale, which I certainly appreciate. I wouldn’t say this is cobbler exactly — it’s peaches and cream all the way. It’s mostly a black tea base with tiny peach pieces and lovely pink flowers. I went with a teaspoon and half but that many leaves are a bit bitey, so I don’t think it really needs that many leaves. But that means the black tea base isn’t weak, which I wouldn’t prefer either. Both steeps have an equal amount of peach and cream flavor, which I can appreciate. I love it. It’s a GREAT peach flavor too, as some can be very artificial tasting. Not this one. Another unique and lovely cup from B&B.
Sidenote: I’m LOVING CriterionChannel.com. It’s so nice to have these films again after Filmstruck was unbelievably cancelled (by Warner Brothers). These movies are essential and can hardly be found anywhere else. So many of my favorite movies are Criterion movies. sigh.
Steep #1 // 1 1/2 teaspoons for a full mug // 20 minutes after boiling // 2-3 minute steep
Steep #2 // just boiled // 4 minute steep
2019 sipdowns: 38 (Angry Tea Room – Amazing Apricot)