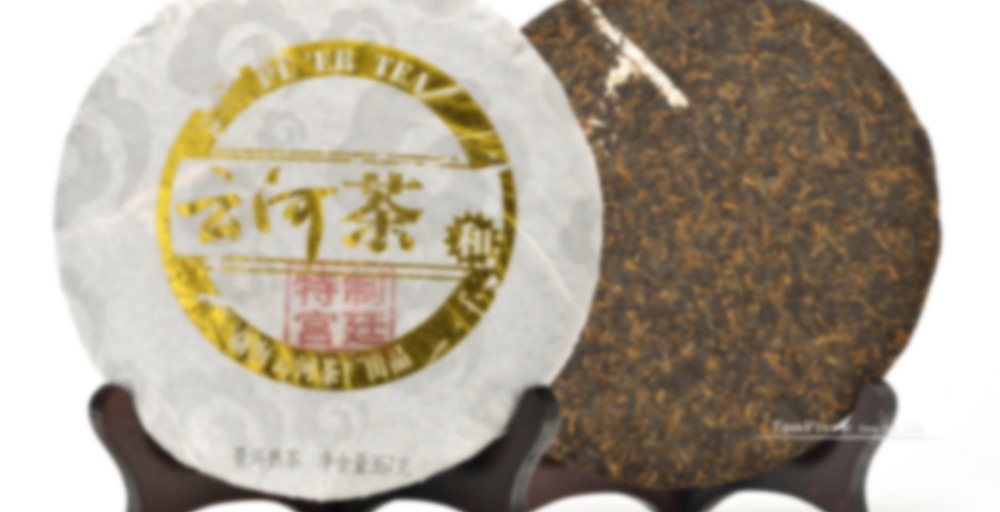 Dry Tea: nice shape; the cake is covered with golden pekoes, has plenty of buds, and pleasant aroma

This Menghai Palace Ripened Pu-erh Cake Tea 2008 comes from the typical production area of Yunnan pu-erh: Menghai, Xishuangbanna.. With the elegant aroma, soft taste and golden appearance, this 2008 Palace Pu-erh is worth trying.

Thanks to Angel at Teavivre for this sample. So, where does all the time go? I spend most of it sitting at this computer writing, so you would think that I would find the time to write up the various teas I have drunk, but, oh no, that does not happen. How embarrassing! It’s just a good job that I scrawl my notes on the tea with pen and paper first.

The dry leaf smells of wet wood, earth and cedar. I brewed it in a gaiwan and poured out a thick and dark liquor. It looked great and tasted pretty good too. The over-riding impression for me was a continuation of the cedar, tempered by leather, a little woodiness and something sweet and caramelly. Is that even a word? It is now. It was smooth and sweet and very enjoyable, although perhaps a little too middle-of-the-road for me. That said, I’m sure this will be many people’s cup of tea.

Thank you to Angel at TeaVivre for this lovely sample!

Dry: This pu-erh cake is tightly woven with some golden leaves and smells sweet and earthy, almost syrupy.

Steeped: My husband wanted to try it and I only have 1 gaiwan, so I brewed it Western method using bottled Spring water. The brewed tea is very dark with a gentle sweet fragrance, though it reminds me of black coffee by the way it looks.

Taste: Full-disclosure: I don’t think I am a pu-erh lady. I’ve had 3 well-liked ones recently and none of them would be something I would reach for over my usual favorites (certain straight blacks, flavored blacks, straight greens). That said, this is a bold and flavorful tea. I get notes of leather, earth, smooth wood, and that background syrup sweetness that I smelled in the dry cake. It almost reminds me of brown sugar.. if it was wet and mixed with woodsy things. I’m giving this a good rating because it is exactly what it is supposed to be except I don’t detect much in the way of nuttiness, but my personal flavor preference is for TeaVivre’s other lovely black and green teas. Hope everyone is having a lovely week!

Tea provided by Teavivre for review

Trying the fourth out of five samples Teavivre sent me to try. At first I wasn’t sure which one I wanted to save for Chinese New Year. But considering how bitterly cold it has been lately, I put off trying the two ripe puerh teas. Having black tea is nice in the winter, but ripe pureh is so earthy, dark and heavy that it uplifts any thoughts of bad winter day I have.

There were no steep suggestions on the website, so I chose the gongfu steeping from another ripe puerh and steeped Menghai Palace Ripened Pu-erh Cake Tea 2008, 10 times.

First steep brought out all the flavours I expected; deep earthy, mellow, woodsy. The cake piece hasn’t completely unraveled yet.

Second steep really cranked up bold flavours. And the cake finally unraveled on the third steep. It was a bit stronger than I anticipated. Not in a bad way, but it’s a very bold ripe puerh flavour. It maintained a really bold flavour up until the seventh steep. Then flavour of the tea weakened a bit, and I could taste some more subtleties; licorice, anise, pepper, leather, herby. And finishing on the tenth steep, it had a bit of a nice sweet aftertaste.

Overall it met my expectations. Ripe puerh is always a good pick for resteeping gongfu style. It maintains its flavour over many resteeps, and it’s a very strong flavour.
There’s nothing that impressed me about the tea, but it didn’t have any negative or unwanted flavours either (aside from being really bold, which could be a pro or a con for another person).

Another sample from Teavivre – i’m trying to get to these sooner rather than later since Angel is generous about sharing her teas with us. This is one i’d order again. I’ve been sipping it on and off this morning in between other teas and it’s really nice. It’s got a creamy sort of feel like it – almost like a creamy cocoa except it’s not really cocoa like at all. it’s a smooth puerh…not really earthy.

Later steeps are giving me a much more dark chocolate sort of vibe while retaining that initial creaminess. A little like chocolate and coffee…with hints of leather like..i am a fan.

“… Angel is generous about sharing her teas with us.” +1 Angel is awesome!

I am not a big pu-erh fan so take this with more than a grain of salt. I sort of had to push myself to make this so I could do another sip down.

Kind of a mild leathery taste. Not bitter or astringent. Nothing wrong with it but confirms that I am not a pu-erh lover.

Thanks, Angel, for this sample! This is a pretty smooth, solid ripe puerh. It doesn’t have too much fermented taste, just a bit, and there’s a nice caramel sweetness lasting through many steeps. I could see this being a “go to” ripe puerh when I’m in the mood for caramel. :)

I prepared six cups and this shows no signs of letting up. In fact, the last four cups were steeped only long enough to fill and pour. The brew is dark burgundy by the second cup and stays that way. The flavor is spicy cedar, earthy loam, and faint old book leather. This has magic properties for opening my lungs, or at least it feels as such. The best part is, I feel more mellow than the tea I’m drinking. I am not really sure what tea drunk means but if this is it, it is pretty far out man. Peace out.

Was this a sample?

Yes. I used the entire sample in the gaiwan. Way more leaf than I normally use but it was not rough or bitter with flash steeps.

Another from the anniversary sample sale a while back. Thank you, Teavivre! As expected, another lovely pu-erh. I used the entire sample pouch (probably 10 grams) of these reddish gold tinged leaves. The first steep is so sweet and subtle, probably from waiting ten minutes to steep. None of those unlikeable pu-erh characteristics even before the rinse. Any Teavivre pu-erh is excellent if you’re trying to avoid those. The second and third steeps are pure coffee and dark chocolate delicious. Normally I’m not a fan of coffee, but I think a good pu-erh has all of the things I actually like about coffee. I’m also learning that any pu-erh tastes like coffee and dark chocolate if you use THIS many leaves. I probably shouldn’t be using so much for a 12 ounce mug, but it’s delicious this way anyway. But I DID describe the other Menghai 2009 as chocolate and coffee, looking at my review. The last steep had hints of maple syrup. I think I’ve tried so many ripened Teavivre pu-erhs that it might be a little difficult for me to tell them apart (might be my tastebuds aren’t refined enough). All of them are very high quality and have very similar flavor profiles. I end up loving them all so I couldn’t make a mistake buying any of them anyway.
Steep #1 // 10 min after boiling // rinse // 2 min steep
Steep #2 // 8 min after boiling // 3 min
Steep #3 // 6 min after boiling // 3 min
Steep #4 // just boiled // 5 min

Thanks Teavivre for the sample!

This is a very smooth puerh. It starts off a lot more subtle than most I’ve had. It’s not terribly memorable, but at least it tastes good. :P Just a basic sweet ripe puerh taste.

You can tell that this tea is good quality because it keeps giving and giving! When I was done drinking I brewed it about 8 more times for my yixing pot to soak in.