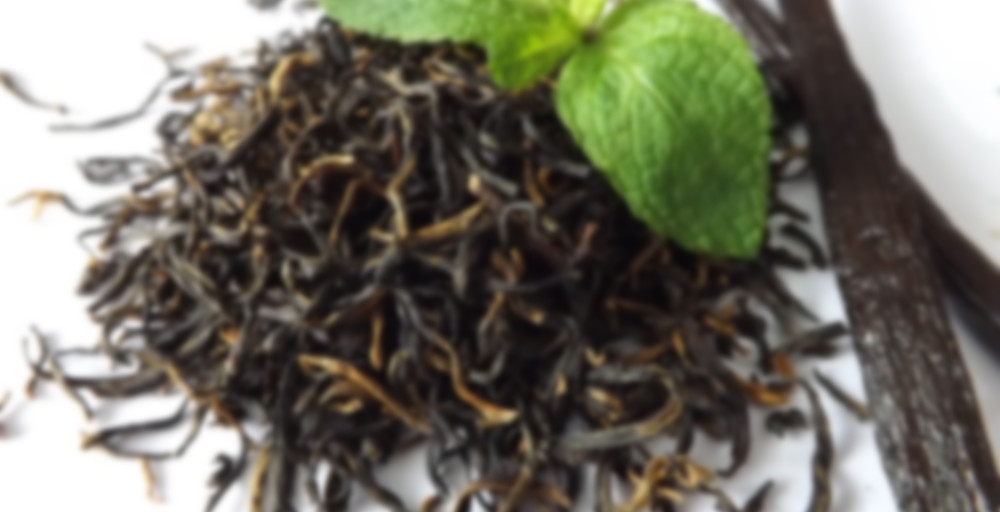 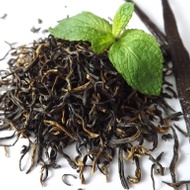 This is our Not So Vanilla tea with the addition of mint. This tea is a malty, chocolatey imperial golden monkey with hand chopped grade A Madagascar vanilla beans and some mint. It is smooth and decadent. Tastes like an After Eight chocolate.

I am exhausted! But on the very very positive side, more and more things are being ticked off my moving to do list every single day, which is probably a good thing since the move is happening in only three more weeks!!! The visa run to Canada went well and we were lucky enough to be able to spend a couple of days skiing in Whistler while waiting for the Embassy to return our passports (Yay!!) but now were home again and the packing nightmare continues…. So today I’m focusing on finishing our inventory sheets for the removalists and of course, drinking more sadly neglected tea I’m rediscovering at the back of my cupboard…

Tippy’s Tea’s thoughtfully puts the pack date on their packets and so I can quickly identify that this tea is almost 12 months old which explains the lack of mint flavor in the brewed cup… this makes me sad because its all my fault that this tea is probably not up to scratch on the flavor side because I forgot I had it… boo… but thankfully its still a tasty cuppa, just no mint… It tastes a little bit more like a breakfast tea at this point, malty, with a hint of cocoa and vanilla… all in all still a win, it just didn’t stand up to 12 months of neglect.

In the tea box from Phi. When I first brewed it, I got the scent of mint. The flavour is some creamy cocoa from the base, with mint, and hints of vanilla. Not something I’ve had before, but the flavours go well with the Golden Monkey.

Unfortunately, this isn’t the minty perfection that I was hoping it would be. I can smell some mint in the pouch but it’s not as strong as I would have expected. This, consequently, translates into a weaker cup of minty tea. I’m also not a fan of the base, which is on the earthy side. It won’t take much effort to finish the pouch, but it doesn’t seem like I’m going to be reordering.

No After Eight! At least for me. But perhaps others think so?

Nope, not sweet enough to be compared to an After Eight :)

Thank you Cavocorax for sharing but the last of this sample has fallen victim to the Florida tea weirdness. I tried using Brita water instead of tapwater but this tea still has a dirty taste to it. So weird and quite disappointing as this was a delicious tea.

I’ve had this one a couple times now, most recently being last night as we sat down to watch a movie. My husband decided to put on Dumb and Dumberer which was a plan i was NOT super keen on, I didn’t LOVE the first one and i am not a big fan of stupid idiot comedies.

I know this isn’t a movie review site, but I feel compelled to tell you that I laughed out loud a lot of times and so I can’t really hate on it like I thought I would. It was stupid funny.

The tea, however…. definitely tasty. I guess the spectrum of all my reviews is pretty much like “hey, this was enjoyable” or “yucky, so bad that I dumped it out”… with a bit of “meh” in between.

This one definitely falls under the “enjoyable” category. I’m a pretty big advocate of the ‘Not So Vanilla’ tea, which, with the addition of mint, became this tea.

I think if (when, really) I were to repurchase from Tippy’s Tea, I am likely to just buy twice as much Not So Vanilla and skip this one.

While it was good, I love vanilla so much that I don’t want anything (mint, for example) to overshadow it.

I liked how it’s not an artificial “chocolatey” mint tea, because whatever cocoa notes exist would come from the golden monkey tea.

(I wouldn’t complain if it was a bit more chocolatey though…the tea base I mean. I wonder if anyone’s ever mixed Laoshan Black with mint leaves??)

I remain a superfan of the “Not So Vanilla” though.

Yep, those movies suck. I’m glad you enjoyed the tea though. We have thought of using laoshan black tea for this. I am a big fan of the laoshan black tea that Verdant tea sells. That stuff is delicious. Or even a dian hong would work well. We’re slowly expanding our tea inventory so in the future we will definitely be experimenting with different base teas. None of our blends are ever set in stone.

Looking forward to seeing what the future holds!

So…I gotta be honest…I was really really looking forward to these teas. When I opened the package I was hit by a wave of minty-ness, it was bold and amazing!
I couldn’t wait to drink it. So I brewed it up and when I went to take a sip the strong mint flavors had calmed down. I mainly just tasted the black tea base which really wasn’t my favorite. Tasted really woody to me. :(
There were still mint flavors, but really not strong enough to hide the woodiness for me. :( I was looking forward to this one too.
Really disappointed with this one :(
If anyone has experienced the same thing, or has any tips about making the mint flavor stronger, that would be great!
Otherwise I gotta find a new home :(

Oh man. I have been eyeing this one as mint and GM are two of my favorite things in the tea world. I will have to watch what others say about the mint…,,

Everyone seems to like it, TeaTiff…which is why I ended up pretty disappointed. :/
If you wanna swap I can send you some if you want?

I got a bag of Not So Vanilla that was just meh, and that’s after I really loved a sample of the same tea earlier. I feel like maybe the base tea is a bit… inconsistent? Or something. I’m still really confused.

Thanks to Cavocorax for letting me try a bit of this one! I’m wondering if it’s the sort of tea where the flavour fades when it’s in a baggie – or maybe it’s just not very strong, but I ended up with a fairly weak cup. That said, I could both see and taste the quality of the base tea (big points), and the flavour I could pick out was pleasant, and not overly minty. I’ll try again with a greater leaf:water ratio (I may have underleafed, especially since it’s pretty fluffy), but I’m tentatively impressed. Looking forward to Not So Vanilla!

Oh, I hope it didn’t leak flavours. I thought those bags were pretty good, but maybe I should have double-bagged them! Hope your next cup works better!

I don’t know what bags you used but to speak from an experience we had an issue with baggies before. We ordered a whole bunch of samples from a tea company that will remain nameless. The samples came in little clear plastic baggies that were also well sealed. Unfortunately, co-mingling of flavours occurred and ruined any potential for an enjoyable tea-drinking experience. It was sad because we were both looking forward to trying those teas, but they all tasted like variations of each other because of the incestuous nature of the packaging.

Cavo, order these! I know that with the exchange it’s not such a good deal anymore, but they fit 5 tsp or so, which is an excellent large sample size IMO.

Anlina (I think?) orders these ones too.

oooh! That’s fancy!
The ones I use were from Staples – they looked like they were ok, but I wasn’t sure.

They ARE fancy, but oh so lovely.

I got a sample of this tea in my Tippy’s order. Btw, their samples are very generous! The dry leaf smells amazing! My coworker said it smelled like Thin Mint Girl Scout cookies! Brewed up, this tea is essentially Not So Vanilla with a hint of mint, which is absolutely perfect for me because I adore Not So Vanilla, and I’m not a huge mint person. Really yummy. :)

We have all these teas, the ones that use the golden monkey tea, back in stock now.

i think my mouth has trouble with these teas from tippy. This one is more chocolate than mint for me today…but i can almost see where folks are comparing it to an after eight. I would need a buttload more mint for that to be a true comparison for me :) That being said, this is still a tasty tea and one i might consider once i finish up the last of my peppermint patty from stacy…not that this is a herbal, but there also isn’t really room in my cupboard for a huge number of mint teas!

I like the base of this tea…and i think it for sure has potential. It makes me excited to try other teas from tippy once i get my cupboard under control. Thanks for sharing Cavo!

Yes. This is either an After Eight mint (of which I can eat whole boxes at a time) or a minty chocolate cookie that I have a recipe for… I’m leaning more on the cookie side as there is a slightly baked good note in the scent. This is a well balanced blend. Unsweetened cocoa and mint and the vanilla smooths out the edges of both of the other flavors. Sometimes those two can be sharp on the tongue.

I was careful with steeping per instructions for this first time. I think I’ll add a bit more leaf next time since I tend to like my Golden Monkey teas slightly overleafed. But for this one, it was 1 1/2 teaspoons per 8 ounces spring water @ 200F for 3 minutes.

this sounds so yummy!

This is a new favorite of mine. I got a sample with my Tippy’s order and I wish I would have ordered 50 grams of this.