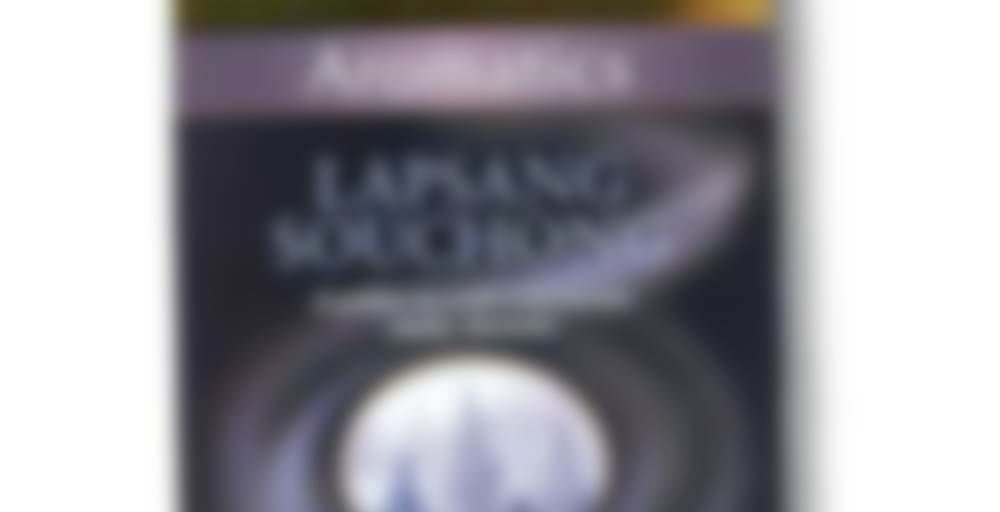 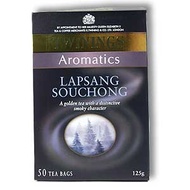 with 47 Ratings Rate this tea Rate This Tea

Lapsang Souchong, also referred to as smoked tea, is one of the worlds’ oldest and most distinctive black teas. The tea is grown in the Wuyi Mountains in the Fujian Province of China and is made by only a select number of estates. Once a very secretive process, Lapsang Souchong is prepared using the same manual techniques today that have been passed down from generation to generation. After the tea is plucked, the leaves are withered over cypress or pine wood fires. They are later placed into barrels so that the smoky aroma intensifies. As a final step, the leaves are placed into flat wicker baskets and positioned on bamboo trays over smoky pine fires, where they dry and absorb even more aroma. The finished tea leaves are thick and black and when steeped in hot water, produce a rich tea with a unique, smoky taste.

To savour the full flavour of our teas, bring water to boil, and pour over the tea as soon as it reaches boiling. Over-boiling will cause oxygen to be reduced, making the tea taste “flat”. Brew 3 minutes or to desired taste.

*We do not recommend using a microwave to boil your cup of water.

The ratings on this are all over the place. I rather liked it. I actually got three steeps out of the bag. The first made me think bacon. The second was pulled pork. The third was lighter but still full of flavor. The base is a little hard to detect. Basically a respectable smoky cup.

resteep from a twinnings bag? i actually never have tought off doing that

I often try and it doesn’t work well, but occasionally one surprises you. This is the first time I liked the second cup better than the first.

I just looked this up and apparently Twinings has discontinued this tea. Figures.

I will check but I might have this. Gav bought it in Ireland and didn’t like it. If it is here, you can have it! I finally mailed you those Assams I told you about, as well as some special from Ireland Twinings!

You’re too kind but not necessary. I was researching this tea for a longer blog review when I found out it was discontinued. It left me a little baffled why they offered it as a free sample in their 3 bag give away. Glad they did though. I am not afraid of Lapsang now.

Can’t wait to try the Assams. It is one type of loose leaf teas I haven’t investigated much yet.

They are still showing it as available on their US website, and Gav just bought his not long ago in Ireland. It may still be around! Rats! I could have sent you some good lapsangs, too! Next time!

Yep, when I checked their website the other day this was out of stock. The loose leaf version said out of stock and discontinued. So I can get this in bag form.

Twinings sample bag.
First LS I have ever had in a bag.
I was surprised. It is not terrible.
Not a very strong LS though.
But,I would actually purchase some of this to have on hand for a quick tea time or for stashing in my purse for traveling or visiting.
Also, might be good for those timid about trying a LS for the first time.

I keep teas in my purse too and seem like a psycho when I order hot water in restaurants and pull out my own bags! Haha I would say putting this one in your purse may be dangerous unless you want everything in said purse to smell like this tea.

I don’t know, I kinda like the smell of LS.
I could think of my purse smelling of worse things;)

Which reminds me…I’m down to one emergency stash in my purse… :)

I usually LOVE me some Lapsang Souchong. But this one is just pure gross. I won’t mention what it reminds me of… I don’t want to ruin anyone’s tea appetite. I think I might not even finish this cup and that never happens. It just doesn’t seem like it was genuinely pine smoked. It might be some kind of artificial smoke flavoring that reminds me of BBQ sauce (but I like BBQ sauce). I never have any luck with Twinings… I think they might be my least favorite company. I’ve tried so many Twinings and they never seem to work for me.

TO ANYONE WHO HASN’T LIKED LAPSANG SOUCHONG: If this is the one you’ve tried, do NOT give up on them. There are much better blends out there.

WOW! You and AMY must be sipping from the same swill!

This was my first foray into Lapsang Souchong and it is pretty tasty… and pretty, pretty, prettttyyy weird. I heard that Winston Churchill liked this tea and that makes sense, it tastes more like a fine bourbon than a tea. :) It’s awfully unusual so don’t serve it to distinguished guests who have only ever drank PG Tips. This is more like a punch in the face than a tea, so be careful. But it definitely has it’s time and place.

Note that it has a very distinctive odor. Put less politely, it STINKS. So if you put it in your tea cupboard, it will spread it’s smell around like an unwanted college roommate. I had mine in the Twinings Box and it couldn’t contain this power house. I had to eventually chuck out the box and just put the tea bags in their sachets into a ziplock bag. That seems to have roughly done the trick so that everything in my tea cupboard doesn’t also taste like Lapsang Souchong. What a crazy tea!

Anyway with all this yapping it’s still a great tea. Seems like probably some people have gone nuts and made a much stronger version of this tea so I suspect despite it’s insanity that this tea is actually “tame” as far as Lapsang’s actually go. I am keen to experiment some more though. It’s very weird, but it’s a fun and interesting tea. Never had anything like it before and it’s an acquired taste, which I quickly acquired.

Have fun and be careful. Your Grandma (unless she is super awesome) will probably hate this.

you are right, there are much smokier versions than this one (OTOH there are some much wimpier mixes which are often too smoky for most people). I think Lapsang Souchong you either love or you hate. This version is maybe the easiest to find to me, and I find it so comforting, just right.

I hear lapsang souchong tea is usually lighter in caffeine, and personally this mix seems low on caffeine to me, which is good, means I can take it later in the evening which is when I like it best.

well said, cteresa! Thanks for your comments. I just recently had the Baker St Blend from Upton Tea House and that has been a really interesting route to go – it’s a Lapsang blend so it’s less intense but still retains a bit of the smoky flavour. Really, really good.

I wasn’t aware of the lower caffeine, that’s great news. I’ve been searching for more interesting evening teas as too many of those herbals can get boring after a while :)

Oh, try the caffeine test with care, I can not swear to it, though googling a bit, it seems lots of different sources agree LS is light on caffeine compared to other teas – though it might still affect people.

For no caffeine teas, I have became a rooibos fan, though admittedly a rooibos snob – a lot of rooibos, particularly the cheaper ones (urgh! I warned you about the snobbery. but sort of true) seem muddy to me, but nice good rooibos it´s just there in a much nicer way than herbal teas, without messing with my sleep. Ok, warning you yet again about the snobbery, but Mariage Freres makes some very good rooibos mixes.

Rooibos is super awesome, good call. I am actually not a huge herbal tea kinda guy but yep, Rooibos is such a great fit for the no-caffeine evening tea for me too. Tasty stuff.

Thanks for the recommendations!

This made my day. Haha I fully agree with the punch in the face comparison.

I received a sample of this tea and was really disappointed. The smoky smell was overwhelming right out of the package and didn’t dissipate when hot water was added to the bag. Rather than being a pleasant smoky smell, it conjured up mental images of bar-b-cue in tea form. I just wasn’t happy with it.

Got this from the “three free samples” promotion from Twinings, and I have to say it isn’t half bad! Pretty smooth and fairly smokey, but bear in mind this is the first lapsang souchong that I’ve tried.

need to try one myself!

This was delicious with brunch-scrambled tofu, veggie sausage, hashbrowns! I’ll often drink chai or fruit flavored tea with a weekend brunch, but somehow the combination of the smokiness with hearty, savory foods is perfect today.

Ugh. Rough day, lots still to do. The answer – Lapsang Souchong, or “Warrior’s Tea”. I used to drink this while playing arena, hence the nickname.

Hmm… I’d say it was fairly neutral in flavour, but there’s a hint of a malty aroma, and somehow a piping hot cup of this seems to focus everything a bit more. Great for getting on with things, I hope ;-)

Hmmm. If I told my beloved that Lapsang Souchong is “warrior’s tea” perhaps he wouldn’t give me the wrinkled nose please-take-it-away look.

I don’t really feel I can give this a proper rating, as I’ve yet to meet a lapsang I can actually drink on its own; indeed, I bought this one to blend with other things and cook with. It’s good for infusing smoky flavour into other things.
I’m giving this a decent rating because it’s probably decent for a lapsang, there’s just something about the campfire-y flavour that I can’t do on its own. Last night I took two bags and steeped them in milk, then used that milk to give a smoky, deep note to a chocolate cake. It’s also sandwiched with black cherry jam and topped with almond buttercream. Nom.