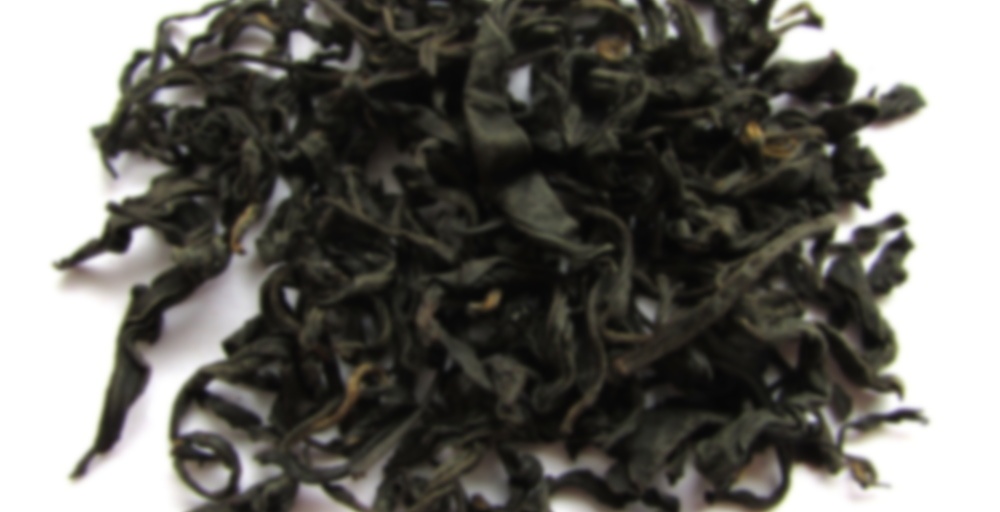 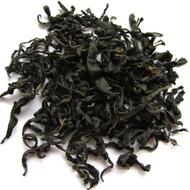 An aromatic smooth sweet tea with a stone fruit taste, which is very receptive to extended brew times without any detectable bitterness or astringency.

The end results are most impressive with the tea of a very consistent quality, delivering a clear well defined fruity taste, unique to teas of Georgia.

Made a quick and dirty cold brew of this before leaving the house yesterday morning. About a tablespoon of leaves unceremoniously dumped into the bottom of a 16 ounce double-walled glass thermos, filled with cold tap water, flimsy mesh strainer insert to keep the leaves down in the liquid where they belong. It then got to sit in my icy cold car (yay, 11F February afternoons!) until 3 pm, when I was able to briefly scuttle out of the haul truck I was operating and nab it to sip on for the rest of the day.

First impression: smells like warm red grapes and tobacco. I had made a heavenly batch of cold brewed Shan Tuyet the day before using the same method, and the contrast between those two cups really shows how different black teas can be. They can go from the malty cocoa goodness of cold Shan Tuyet to…. well, tasting like blood on the first sip. Really thought I screwed something up with this one because it has that overripe red raspberry flavor that teeters into the sanguine category of tastes. Lots of acidic, wine-y, tobacco notes behind that. It has depth once you get past the initial pungency.

It’s not unpalatable by any means, but I don’t think this tea and I are compatible. Going to try it in hot water before I give it a numerical rating. Who knows, that blood flavor might go away with some heat! (I hope.)

I agree with most of the previous reviews for this tea: it is indeed smooth, not astringent at all and full of stone fruit (plum, apricot, cherry), raisins and baked apples. The best part is the dry leaf appearance: very intricately rolled into wavy, twisty curls.

When I took a first sip (Western style) I thought “Whoa, that’s a unique taste with its combination of sweet and sour!” – but that feeling dissipated quickly: this tea does not grow on you much as you drink it . The main flavors, why pleasant, come as somewhat underpowered, and the tail of the taste is disappointingly sour. It is not a bad tea, but I had decidedly more balanced and lively teas with the stone fruit profile.

If you want to get me excited about a tea, put “stonefruit” in the description. The story of a guy reviving an old tea farm also won me over. This is the spring 2019 harvest. I somehow thought you could gongfu it, but the consensus on here is that it works better Western, so I steeped about 2.5 teaspoons in a 355 ml mug at 203F for 4, 6, and 10 minutes.

The dry leaf aroma is of soy sauce, plums, and raisins. The first steep indeed has a lot of stonefruit, such as apricots, raisins, and plums. There’s also caramel, roast nuts, dark wood, and a bit of that umami soy sauce flavour. As others have mentioned, there’s almost no astringency. The second steep has lighter raisin and stonefruit notes, dark wood, a little malt, and some tannins, and by the third steep, it’s just a generic mild black tea.

I’m not usually a huge fan of raisin notes in tea, but this one is still very tasty. I might try adding even more leaf to intensify the flavours, as I think my gigantic mug attenuated them a bit. Also, two steeps seems to be the limit. This is a solid tea that I’ll enjoy playing around with.

I think it was the combination of umami and sweetness that gave me that impression. Anyway, yeah, it was interesting!

I think it was the combination of umami and sweetness that gave me that impression. Anyway, yeah, it was interesting!

Yet another swap from Togo, thank you. Autumn 2017 harvest.

The dry leaf isn’t very fragrant. There is a dominant dried sour cherry and prune note with some malt in the background. Wet leaf smell is light with vanilla and wood.

The aroma is very similar to the dry leaf with an elusive note of chocolate-covered raisins.

The taste is fruity and bright with a brisk, woody tone like a Ceylon. The same dried fruits dominate and the chocolate-covered raisin of the aroma is likewise subtle in taste. Hints of rose, too. If brewed heavier, cedar becomes the forward note. Finishes tannic with maltiness and subtle dried apricots and cream. Leaves a dry, salty-sour impression in the mouth.

A nice, brisk daily drinker with dried fruit flavors. Probably good for those that like to add a touch of milk.

This is the first tea I’ve tried brewing with a more gong-fu-like method. Much more tea, less water, briefer. It’s really unlocked the refreshing flavours for me. Very pleasant. I may need to re-do several reviews brewing in this way.

I had this for the first time today but I’ll give it another chance before I rate it. I don’t know if I messed up something but this was a really weird experience. It could be that I overleafed or oversteeped it or that I didn’t wait for it to cool down a bit and burnt my tongue slightly. After a decent albeit a bit weak and watery first steep I increased the steep time. The liquor and leaf had a pleasant fruity and toasty smell but it left my mouth bone dry with a slight sour aftertaste and a really baffling saltiness. I could literally taste salt. Weird stuff.

The dry leaf possesses aromas of tomato sauce and seafood. Those are also present in the wet leaf smell, which is very enticing and unique. There is a slight reminiscence of the Dehong Ye Sheng hong cha by YS, but only in the robust base notes.

The taste is quite fruity and bright, a mix of sweet and sour initially with more vegetal character in the finish. Overall, it is quite mellow taste due to the lack of bitterness and astringency, but it has decent depth and complexity.

Here’s a tea I have been looking forward to reviewing for some time. I somehow ended up with two sample pouches of this tea over the course of the past year. I think I bought one and then received another as a free sample with a later What-Cha order. I worked through both of them earlier in the week after reorganizing my sample bin. Though I am a huge fan of Georgian black tea, this was probably my least favorite of the Georgian black teas from What-Cha that I have tried. Despite that, I still found it to be a more or less very good tea and especially appreciated its smoothness and lack of astringency.

I prepared this tea in the Western style. I steeped 3 grams of loose tea leaves in approximately 8 ounces of 203 F water for 5 minutes. I did not rinse the leaves and I also did not attempt any subsequent infusions.

Like most of the Georgian black teas that I have tried, this was a very approachable, mellow, and forgiving tea. Unlike the others, I found this one to be a little flat in the mouth and felt that its finish was a little lacking. Those are comparatively minor quibbles, however, as I would have no issue with giving this tea another shot in the near future. Overall, this tea was definitely worth a try, but I feel that What-Cha has offered some better Georgian black teas in the past.

I way overbrewed this tea, I thought it was the right size for 1 sample because I misread. It is amazing the first steep. Very fruity, I get apricot and raisin type aromas and flavors.

Second steep needs more time. Definitely not as fruity the second time around.

I don’t know why, but when a tea is said to have “raisin” flavor profile, I want that tea. And I am not exactly a fan of raisins, but when it’s in black tea, I adore it!

This tea reminds me of a black dragon pearl tea cousin. It’s robust, caramelized and sweet, and stewy. I gave my friend a sip, and they usually think tea is bitter enjoyed this. It has no astringency. So many flavors, and so delicious.