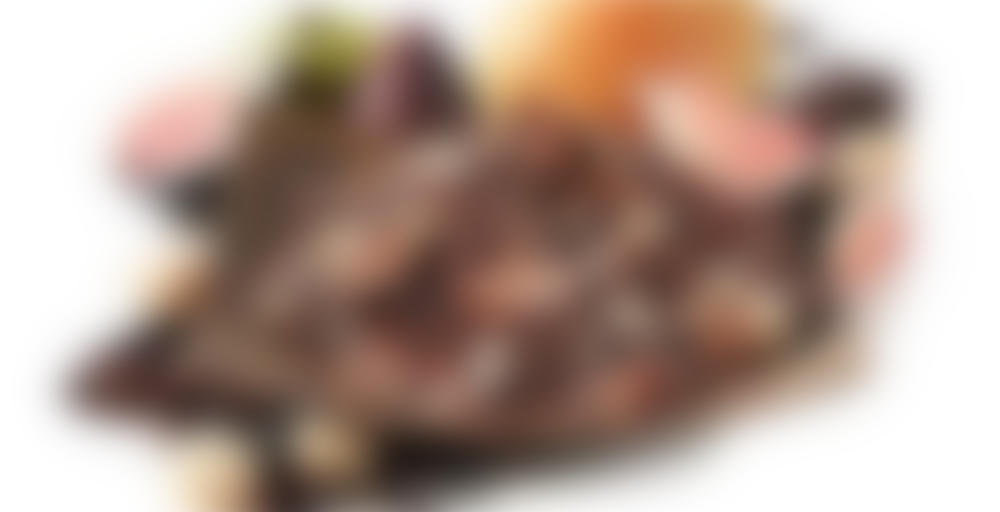 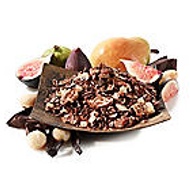 Skip dessert with our Cocoa Praline Tart and you won’t miss it! This deliciously sweet Rooibos tea blends tasty figs, succulent pears, candied macadamia nuts and rich chocolate chips with Rooibos and Honeybush teas for a healthy alternative. A great choice for the sweet tooth in you! Contains nuts.

This either dates to my chocolate flavored buying spree or to the Teavana tea of the month club membership, not sure which, but it’s surprisingly good.

It’s another apple juice colored liquid, but this is slightly darker (not as dark as that really “healthy” apple juice that’s brown, more the color of a darker kids’ apple juice).

It’s pretty tasty. The BF said it tasted like liquor but I don’t get that flavor. There’s a light, sweet, chocolatey flavor over a fruity, almost light jammy-flavored tisane (though jammy here doesn’t refer to mouthfeel or body but to the flavor itself). No. 2 gave it the thumbs up.

Unfortunately, it’s another discontinued one. Or I would have considered a restock. It does its job as a dessert substitute. Everyone in the house had Girl Scout thin mints tonight, but I was able to resist! (80 calories in just two of those cookies, dammit.)

Bought this during the heavenly sale and it’s another one that I’m now wishing I would have bought more of. I had smelled it before and always been intrigued but never pulled the trigger for some reason. When I saw it was so cheap I couldn’t resist.

I don’t know how to describe the taste really. It’s sweet and tart all at the same time. I get no rooibos or honeybush flavor to speak of nor do I really get the hints of nuts or chocolate. While I think the tea would be better with these accents brought out a bit more it’s still a pretty darn yummy compilation of flavors. It is sweet though, so be forewarned if you’re like me and just automatically sweeten your tea (when I make it in the morning for work it goes directly into the mug that keeps it super hot for a very, very long time so taking a sip before leaving isn’t exactly practical unless I want to burn off all my taste buds).

What else to do but have a cup of tea when you can’t sleep? I’ve been up since about 3:15 a.m. and after 30 minutes of unproductive laying around, I finally got up and had a couple of cups of this. If I’m going to be up even more ridiculously early than the already ridiculously early time I’m going to have to be up to go to work this morning, I might as well have some tea. This was the one tea, of my somewhat limited selection, that called my name.

I steeped for six minutes this morning, and the fruity sweetness of the tea really comes through. I still don’t get that much of a cocoa note from it, but I still enjoyed my pot of tea. It amazes and amuses me how much this tea has grown on me. I’m contemplating getting more once I run out, which is a far cry from where I started out with this tea. Proper preparation does wonders, I tell you!

I’m now trying to decide what to fix to take with me to work. Black or green? Or white? Definitely something caffeinated, after my whopping whole five hours of sleep (is my body not aware I’m not 21 anymore?) . My friend gave me a sample of a hibiscus black tea that I’m curious to try, maybe I’ll go for that.

Boiling 6 min, 0 sec
Yours I Like This
3 likes
1 comments
Edit

Add me to the same boat you’re in. I’m working a 9 hour shift with the most stressful boss at my job today, and then going out afterwards to celebrate my father-in-law’s birthday. It’s going to be midnight or so when I get home….so of course I slept like crap. Went to bed at 12, tossed and turned until 5:30. Fail, body, fail. Hope you get through the day!

I have now tasted all five Teavana teas I bought this morning… I didn’t mean to drink them all in one day. But I couldn’t help myself!

This tea is very, very sweet. It works pretty well if my sweet tooth is itching for something, but I don’t see this being a regular drink for me. Once in a while it will be nice, though. It’s very chocolatey, and quite tart. The fruit is a nice addition. It does kind of remind me of a chocolate praline, although the flavor isn’t quite the same. Not bad!

Oooh, sounds interesting. I might have to cadge some of this off you.

So, I went into Teavana because I needed more diy tea bags, and, since I was there, I had to buy tea. I mean, I couldn’t not, right? It was RIGHT THERE. I told the attendant that I really liked almond biscotti but I wanted something non-caffeinated and after going through basically their entire stock of increasingly ridiculously named dessert-y teas, settled on this.

Most of the teavana blends are kind of terrifying to look at since they appear to have more stuff than tea, and this is a slightly less egregious example of that. That is, it definitely has a ton of Stuff in, but at least I can see the tea, which is more than I can say for one of the oolongs I tried, which seriously looked like it contains eggs or something? Ok, probably not eggs, but I definitely didn’t see any actual tea.

As far as the taste goes, I’m gonna have to say that this is actually too sweet, almost over sugared. I don’t really sweeten my tea unless I am making chai on the stovetop, so having it come pre-sweetened is somewhat jarring. Also, I feel that the fruit overshadows the other tastes a bit, and I definitely am not getting the honeybush at all. I like the almond biscotti because it’s got a bit of subtlety about it, I’ll probably just stick to that and look elsewhere for my decaf dessert tea in the future.

That said, it’s not BAD by any stretch of the imagination, just a bit…too much.

Edit: I realized that my comment about the subtlety of almond biscotti might be somewhat misleading. This is still me we’re talking about, so it’s not THAT subtle, just…more subtle than this.

This is a very interesting tea! The scent is yummy.. sweet, chocolaty and fruity all at once! Brewed, the smell gets even better. Teavana did a nice job of picking these ingredients to make a great scent.. but it seems like they clash a little bit in the flavor. Its flavor is definitely sweet and smooth, but then there is a strange tartness that comes from the fruit. While it doesn’t taste bad, I wouldn’t say that it’s my ideal combination. I’m very glad that I was able to try this (thank you Meghann!).

This was a great surprise. Nice mix of flavors and i did not have to add sweetner. Which means I get an extra cup. After the 3rd seep I mixed it with the 3rd seep of Wild Orange Blossom made a great last cup.

I had this yesterday and I remember it tasting like hazelnut, which is weird, since there’s no hazelnut to speak of in the blend, but I quite enjoyed it. It was a bit figgy and nutty and pretty tasty with the additional of some sweetener. Think I might keep this one.

I was pretty disappointed in this tea. It was a little too sweet for my taste.