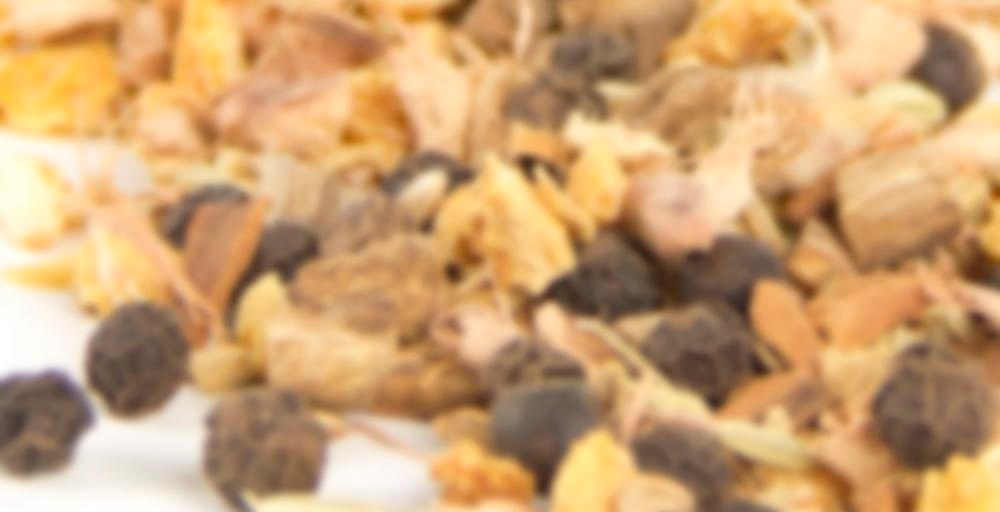 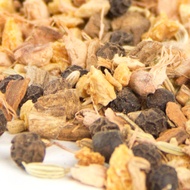 by Verdant Tea
86
You

This caffeine-free blend is a thick and spicy kick that is great hot or iced, with or without cream and sugar. Our goal with this blend was to create something that highlited the spicy end of the flavor spectrum without being simply “spicy.” Ginger and galangal provide that comforting warmth, while the flavor is deepened by the addition of Spanish saffron, fennel and orange.

Like some other people I had purchased this with the intention of mixing it with other teas, I thought it would be great with some dragonwell green tea and maybe a pu’erh.

I really love ginger and always have, aside from the flavor it’s a great medicinal root, good for colds, digestion and just generally warming up in cold or damp weather.

I decided to steep this up on its’ own with an infuser mug and around 2 minutes with boiling water. The ginger is not as strong as I thought it would be, it’s well balanced with the saffron, the orange and the fennel. It is pretty intense and spicy but definitely it matches the description and is as good as I was hoping it would be! It also gets a few bonus points for versatility…

note: I tried it again with some dragonwell green tea and that combo ROCKS! =)

Nice! I’m also excited to try mixing this with stuff. High on my list try try are tulsi and yunnan blacks. Haven’t tried it with any of my greens- I’ll have to do so this weekend.

Now I wish I had ordered more… I just got one ounce. I think it would be good with tulsi for sure.

I’m going to have to add this to my shopping list. It sounds really good.

It is good but Potent!

I’ve always wanted to try this one.

Sometimes I’ll order and ounce of a tea and get hooked, which has been happening lately with the alchemy blends. The are soooo good!

Ginger lovers pay attention to this blend because it’s something special. The ginger is spicy like biting into fresh ginger…with heat to it. The orange, galangal, fennel, cinnamon and pepper (etc.) are blended so deftly that no one flavor stands out alone. This is smooth, warm and comforting tea.

Here is the favorite way I like to drink my Thai Ginger Fire Tea:
I always have coconut milk for my breakfast cereal and often use it in my tea. It’s so naturally rich, sweet and nutty. What a perfect milky addition for the spicy tea along with some sweetening. Thai dishes are often prepared in this sweet coconut spicy way that I love. Very delicious. Caffeine free too!

I know this is going to be fantastic iced.
My favorite iced tea’s are 1. Verdant Alchemy Blends (all of them so far!) 2. Pu’erh’s from Verdant, Teavivre and a few others. These make hearty iced tea’s that revive the spirit on a hot day!
This Ginger Fire will be a great mixer with juices or 7-up! I’m going to try steeping some simple syrup or honey in a little bit of tea, strain… and serve on cornbread with buddah!

When this arrived in my December box o’ teas from Verdant, I was really smiling. I love ginger, I love Thai food, and the blend of ingredients sounded just fantastic. I didn’t have a chance to try it right away, but after a day of sniffles and sore throat thought this would be the “cat’s whiskers.” And it certainly was! Energizing, warm and cozy — and I haven’t even had a chance to try it blended with tea.

A quick side note. Growing up in Miami, we had lots of ginger growing all around. It was brought from Asia to the Caribbean and is a mainstay in the cuisine and drinks. My friends from Jamaica and Trinidad always had homemade ginger beer and ginger ale. Galangal, which makes up a large portion of this blend, tastes similar to ginger, but has a more pronounced peppery flavor, and less of the ginger “heat” or “bite.”

The fennel, saffron and burdock were ingredients I had never tried with ginger or galangal, and they add so much to the brew. In fact, they add an aroma that is not unlike Thai Pandan tea…hmmm, could this have influenced the naming of this blend?

This week I have had this blend hot, cold, and room temperature — mostly without sweetener, but once with just a little honey (yum). I have not found a way in which I did not enjoy it! In fact, I used a bit of the leftover tea to flavor some steamed rice and callaloo stew. I am sure it is going to pair nicely with black tea or pu’er too.

This is like drinking a gingerbread cookie laced with hot sauce. It’s amazing. Clearing my sinuses out entirely. It is a really intense cup, but balanced out with a light, sweet black it could be perfect.

Boiling 4 min, 0 sec
Yours I Like This
7 likes
1 comments
Edit

have you tried this with the Yunnan Golden Buds yet? I’ve been meaning to try it, but keep forgetting.

While I really like ginger in all kinds of food/drink (sweet, savory, etc), I found the ginger in this blend to be overbalanced. The name is very appropriate – this is quite spicy (fun!), and the cup has more depth in it than if you were just drinking thai ginger alone so I think it’s accurate to call it a blend (like chai).
However, it is mostly spicy ginger that I get, and when I blended it with a few different teas (yunnan golden buds, Laoshan Chai, etc.), it took over.

I enjoyed each cup that I had, but the Laoshan Chai was just so much better (for me) that I’d actually buy that one again, but wouldn’t choose this. It might have been me though, as others seem to have tasted the orange and fennel, and found it nicely balanced. I could imagine all three of those flavors going really well together.

I bought this tea because I wanted to use it as a mixer for a few other teas. I was going to blend it with the Laoshan Black tea and a few of the pu’ers that I purchased. Before I did that I wanted to try it by itself. I did not make a big pot of it just did a nice sample size in my tasting cup.
The dry mixture was spicy smelling with a citrus undertone in the back. After brewing it, it reminded me of the times that I was sick as a kid. My aunt would chop up some ginger root and some orange peel and let it boil on the stove for a few hours. It would make the whole house smell amazing. She would add in some lemon juice and at touch of clover honey, and tell me to drink up as got ready to go out with her college friends. Being a kid with asthma this would make my chest and throat feel better in the long run . The fennel and saffron add a nice flavor to it as well. This reminds my of Samovar’s Orange Ginger Herbal Blend, with more kick.