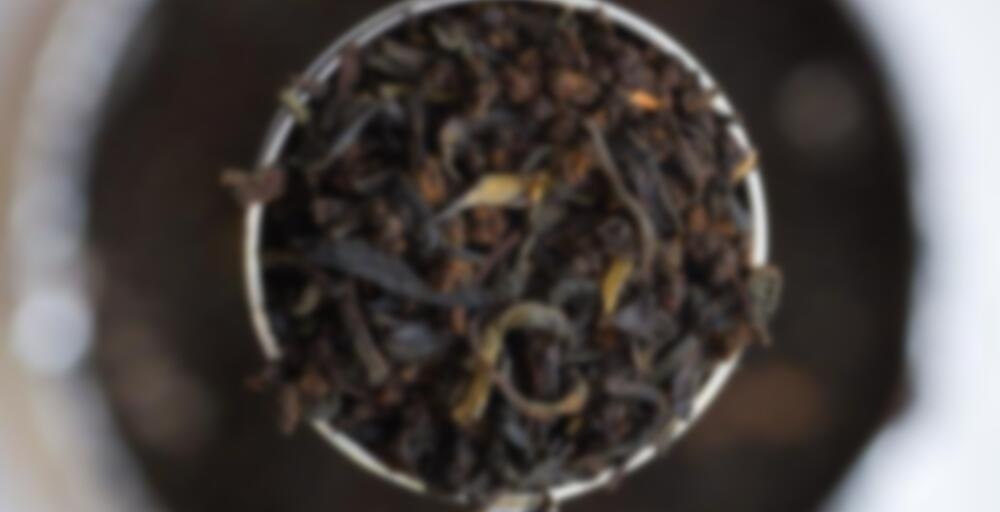 Perfect for those who like a stronger Earl Grey, our New House Blend is a full bodied blend of whole leaf Earl Grey and Assam. Enjoyed for years at founder, Mike’s, family home, The New House, where his family created this blend when he was just a boy!

Sipdown 129-2021
I bought a new kettle to bring to the office and just got it in! Decided to brew a cup of this first thing when I got into the office, as it was surprisingly overcast and cool. Right as I as done steeping it, I was called into a meeting that lasted like 3 hours. Got back to my desk and remembered the tea, which was of course cold. Still drank it. It’s fine. It’s an assam, which aren’t necessarily my favorite. But, this one is nice and subtle with a really nice raisin note.

After opening the zip-bag you can only smell the bergamot oil.
After steeping the aroma is mellow, with only a bit of bergamot plus malt, a bit of sweetness.
But it’s the taste that reveals the complexity of this blend. Three kinds of the black tea complement each other really well, creating a rich effect, only slightly enhanced with the bergamot oil
I don’t add sugar to my teas and I very rarely use milk, but I guess this blend would go well with both these things.

Today’s #septembersipdown prompt is about making a pot to share. Personally, I don’t live with tea drinkers and I don’t usually drink from a pot, however, I pulled out my mini pot for this prompt. I couldn’t convince someone to share though so I am drinking the pot by myself. Oh well.

When deciding what to make, the bottom of the pot said to use your favorite English tea and enjoy it in the English teaware. I don’t have any English Breakfast blends but I do have this tea which is an Earl Grey (which I associate with England – though that might be incorrect) from an English tea company. Good enough!

This tea was a free sample in my last Bird and Blend order. It was not something I have been enthused about so I figured why not just have it and it be done. So, I tossed the tea bag into my teapot and got to brewing. Of course while pouring the water, I managed to not catch the tag on the end of the string before it fell into the pot and then I had to fish it out. I also might have spilled both while pouring into and out of the teapot. Like I said, I don’t use a pot often.

I added milk to the glass since I thought a earl grey would need it. It does. The bergamot is strong but calmed slightly by the milk. It’s not bad this way. And I kept topping up the glass with the tea from the pot as a drank so it got less milky as I drank. It was still tolerable even as the milk:tea ratio got closer. Overall, I think maybe it is decent. I just don’t think its for me.

I know the feeling! I used to live in a house full of tea drinkers, which made it super easy to use up teas I didn’t prefer. Now it’s just me, and sometimes it builds up.

Same here. I don’t have anyone to share tea with either, though I do occasionally foist teas I don’t like on my parents.

Yeah, whenever I fly home for the holidays, my luggage is always filled with tea in dozens of little foil packets, which I’m sure the TSA doesn’t find suspicious at all.

We used to drink a lots of tea, usually a pot for the evening, but recently it is that everyone makes a juice or something fast and simple. And cold! I hope every fall it will change again, but not that much, unfortunately!

I live alone and don’t have any local tea-drinking friends to share with, either. This is why it takes me EONS to sipdown my mountains of tea… just too much in here for one person!

I think this is why I am always happy for the chance to share tea. My sister has gotten into the habit of occasionally grabbing my mug and trying it so maybe with time she will get into it too.

A tea I have ordered and haven’t received from their subscription. I have hoped that it will be better than some typical Earl Grey but actuallly, it is it.

It is nothing exclusive, rather quite generic — but tasty Earl Grey.
The black tea base was tasty itself, as I wrote in previous note: malty, grapes. Nothing close to smoky. The bergamot itself is nicely present, leaves are well coated with oils probably. In the brew the level of citrus notes is right, the base is nice so… it’s nice earl grey.

Good tea, but I don’t really think I will re-order it. I will rather try something new.

From the name, I would think this was a breakfast blend. But actually, it’s an Earl Grey! So that’s interesting. It’s described as being strong, and I saw some CTC leaves in the bag, so I reduced the steep time to 2.5 minutes.

This is quite tasty. I wasn’t sure when they call it a “strong Earl Grey”, whether they mean the bergamot is strong or the tea. But the bergamot here is not overly strong, so I’m guessing they’re talking about the base tea. It’s quite flavorful, with some nice raisin and malt notes and just enough bite without being too tannic. I’m drinking mine straight and it’s perfectly enjoyable this way, though it would also stand up to milk.

Holiday Tea-son! Hey, a black tea in the advent calendar today, so I fixed it up for the work thermos… though they claim it is a “stronger Earl Grey.” I like EG, but prefer mine on the “lighter” side, so I made my thermos London Fog style since they warned it was a “stronger” blend. I did have a little surplus tea, so I put that in a cup just to sample it plain, and… it wasn’t too robust. Yes, a bit more than I prefer in EGs on the bergamot side, lending a bit more citrus bitterness than I like, and the black tea was quite robust leading to more of that astringent dryness than I like, but I was surprised I could still make out some malt, cinnamon, and lemon zest notes in the base. With a lot of EGs they are just a bergamot bomb and I can’t even taste any notes from the black tea leaves anymore, so that was a pleasant surprise.

I didn’t make my London Fog too milky, with a ratio of 50ml vanilla almond milk to 350ml tea for my 400ml thermos, and it was very nice. This is how I prefer Earl Grey’s that are like this. I’ll drink the lighter ones straight, but these really robust ones that are a bit too bitter/astringent for my personal tastes make a nice London Fog, and I just make them up as a latte. The vanilla almond milk adds the vanilla component so I don’t need extra syrup, and adds that thick/creamy/sweet element that tempers the bitterness and astringency, and the vanilla compliments the citrus bergamot flavor nicely. Sometimes I’ll use coconut milk instead, as it is also nicely sweet and a great compliment flavor.

Great London Fog tea, not really my personal taste as a straight tea.

I spent a long time finding the perfect Earl Grey for my tastes, one with a strong base that would not be overwhelmed by the bergamot flavour. This tea comes very close to ticking all my boxes. The base tastes like a slightly lighter english breakfast, with the added hint of bergamot that appears more like an aftertaste. If the flavouring had been only slightly more prominent, it would have been perfect.

I was talking about Kenyan black teas the other day, and then I went through my stash and found that this one has a Kenyan tea as part of its base – along with Ceylon and Assam. It’s also an Earl Grey, like the tea that triggered the revelation, so obviously I had to try it next.

Much like Teapigs Earl Grey Strong, the strength of this blend is in the base rather than in the prominence of the bergamot, and in many ways that makes it a more suitable EG for me. I’m not the biggest bergamot fan, and although the dry leaf seems to suggest that it’s going to be STRONG here, it’s actually very subtle. I gave 1 tsp of leaf 4 minutes in boiling water, and it’s the base tea that I can taste most clearly. It’s deliciously, sweetly malty, with an underlying crisp citrus note attributable to the Ceylon but amped to a certain extent by the bergamot. It’s a well balanced blend, at least to my tastes.

If you like Earl Grey, but aren’t a bergamot fan, this one’s worth a try. I’d say it’s quite a delicate blend, as they go. If you like a good smack of bergamot, you might want to steer clear.

For real? I’m the first one to review this tea here? Can’t be real.

Anyway, I was thrilled to be able to try this tea because I love me some Earl Grey, and this is an awesome Earl Grey. AWESOME! I love the blend of teas used – it provides a solid backdrop of flavor that’s rich, robust and full of gusto. And even better, the bergamot doesn’t wimp out in the presence of the black tea power. This is the kind of Earl Grey that I’m more than happy to start the day with – any time!