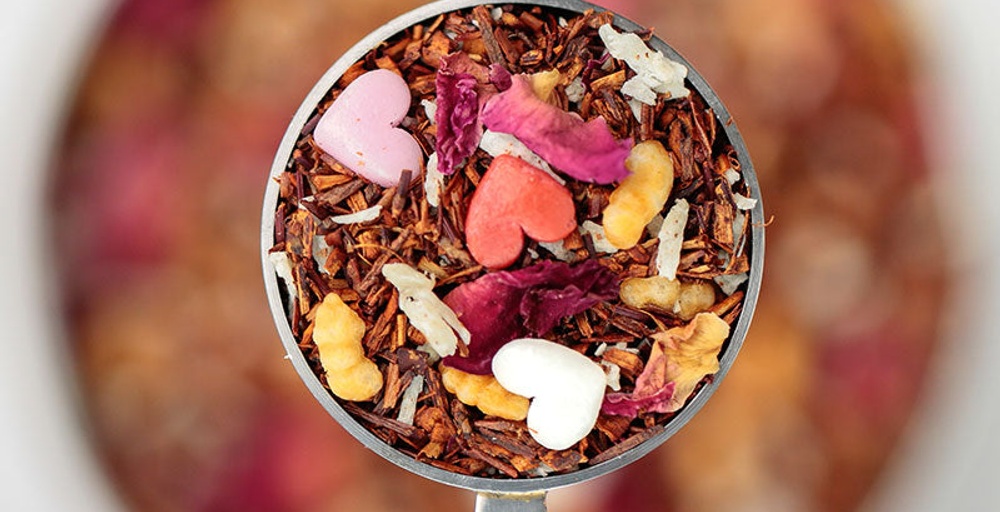 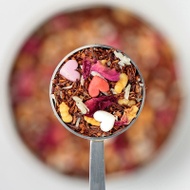 Last night was the first time I drank tea hot in over a month. (summer sucks) I had received this as part of my tea subscription several months ago but never tried it. I bet it smells heavenly, but since I don’t have a sense of smell, I didn’t get that. I didn’t get much flavor either. Sort of picked up on a floral taste. Kinda of soapy. Which is probably me, not the tea.

So for me this one was a pass. Probably another tea lover who can taste various flavorsw would have enjoyed this one a lot.

Thanks SO much to amandastory516 for sharing this tea! It’s one I’ve really wanted to try. So the main flavor is rooibos, and I love the rooibos that B&B uses. The next flavor is a bit of coconut. It tastes better when it’s a little warm, as the flavors become a bit muted with cooling. I think I prefer B&B’s birthday cake flavor since that one has more depth and cakiness. This one is certainly a good rooibos, but not absolutely amazing like that other one. The second steep was almost as flavorful as the first.

I don’t know how to feel about this tea. It’s tasty, but like something is missing there.

Prepared three teaspoons to DIY tea bag. It’s very sweet in aroma and coconut makes its part too. Blend itself looks very pretty, instagram-like, ready for bite. Brewed in boiling water for quite long (they suggest 4+ min) , I did maybe 8? But as it is rooibos, moreover with lots of other ingredients, I thought it won’t hurt to make it strong.

The aroma of brew is very similar. Coconut! But creamy and cake-like. I have enjoyed the aroma of brew very much. The taste is bit different though. It’s certainly creamy, some notes of coconut there as well. But I am missing some depth of it. It’s creamy coconut, but I have not noticed roses at all, I wonder how fenugreek is in matter of taste, quite distinctive rooibos base (but not woody flavour of it).

Maybe I am just kind of disappointed.

From earlier this week.

I don’t think I’ve had a “Wedding Cake” in over a decade, but this definitely does taste like cake of some sort to me. Though I suppose a Wedding Cake can be a cake of any type so long as you’re serving it at your wedding. It’s more like a really nice coconut pound cake to me, with super tasty and rich/creamy buttercream frosting. I’m really into it, even if I find the ingredients list a little bit odd.

Agreed. It’s like birthday cake being whatever cake is served. If it’s a cake served a wedding, it’s a wedding cake. One of ours (we had two parties) was a fruit cake that my MIL made and decorated. A former coworker made a lot of carrot cake for her wedding and spared the expense of the bakery because that was their favourite cake.:)

You know, out of the handful of weddings I’ve been to I never got to eat the cake, for various reasons. “Wedding Cake” is both abstract and intangible. Coconut pound cake sounds wonderful though!

Also, I love that someone loves carrot cake that much. Designer cakes are neat but those homemade cakes are just as special at a wedding (I say, although I’ve only experienced the cake as a prop).

Blech. If this wasn’t a rooibos it would be great, but all I taste is sweet sticks. It’s a super cute tea! But, alas the rooibos overpowers anything good flavor-wise about it.

Aw I’m sorry you didn’t enjoy this one! All their cake teas sound soooo good, but I recently received an order from them and probably won’t order again until their July sale. Hopefully they’ll keep them around for a while!

I’ll pop it into the traveling tea box as well, so you should be able to try some before the July sale!

From this year’s B&B valentine’s sampler. It’s like their Birthday Cake blend, but sooooo much better. Creamier, richer, sweeter, cake-ier. It’s a rooibos, too, and I did wonder whether that would be overpowering. It isn’t; it actually works really well (and it’s rare I say that about a rooibos…)

I made today’s cup as a latte using 3tsp of leaf in 150ml water and adding 250ml hot milk, 1tsp agave and 1/2tsp vanilla essence. It’s liquid cake amazingness, and totally lives up to its name. I’m going to need more of this one…