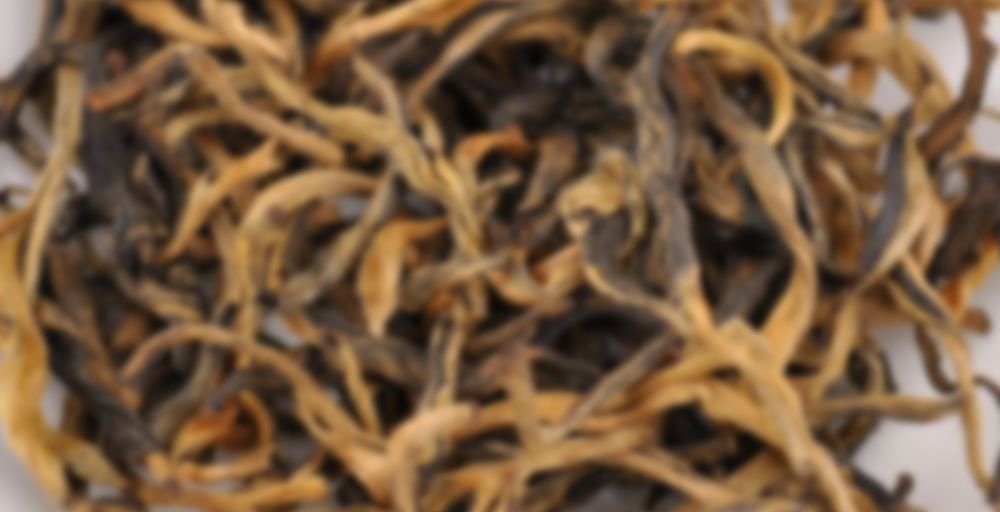 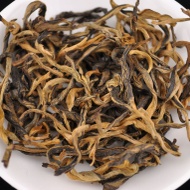 A rare black tea where tea leaves and expert processing come together to create something unique and enjoyable. High altitude mao feng varietal grown in the Wu Liang mountains of Simao is briefly fermented by special technique and then finally processed into black tea. The taste and aroma is distinctly floral and fruit throughout!

A unique tea that is quite different from any other Yunnan Black tea that we offer!

Another Sipdown from Yunnan Sourcing, & the 2014 version is on it’s way to me, so it’s sort of a joke to even count it. In fact, if the truth must be known, my sipdown extravaganza is a bit of a farce, as I have received boxes of tea from several sources & placed a couple of orders. I won’t add those teas in until the last day of the month, but will probably end the month with more teas than I started with, LOL.

However, it won’t be a total waste of sipdowns, simply because I will have polished off all the older samples, TOMC & TOMCR, etc. Everything I have will be fairly new!
Except for all the puerh…sigh…but that’s a different story all together, right?

I like this tea (I should say something about the tea, right?)
It has a savory & floral quality, & a bit of spiciness that lingers & builds up to a tangy quality, kind of like buttermilk.

I don’t feel so bad about breaking my buying hiatus now as I can blame it on you as my inspiration.

I blame her (quietly, to myself) a lot for that. I like what she likes :)

+1 with you guys…let’s blame Terri, lol.
I’m at 333 right now, trinity…that means I,m destined to spend the rest of my life with a cupboard over 300 sigh. Month of may has been more lethal than Black Friday and it’s only the 18th!!

I love you guys, & it has always been my dream to inspire others with my music, so why not inspire them with my tea purchases too? LOL

Since the BBB Box is soon to be on it’s way back to me, I need to get cracking on the teas that were sent to me during the last round. This is one of three teas that Terri included as her offerings.

I forgot to make notes on this one today and it’s from eaaarly this morning. I vaguely remember this been a fairly smooth tasting tea with a slight..fruity note? Not taiwanese black fruity, but there was a hint there. I’ll take better notes next time! i did enjoy it though terri :)

Glad to hear it! I DO need to get my act together & get that box on it’s way to you.

Terri packed her teas for the BBB in tins this time and I couldn’t find my card that told me which was which. I made this one because the other one was clearly a yunnan and I wasn’t sure that’s what i wanted. So dumped some of this one in my gaiwan and hoped for the best. I was SHOCKED to find out this is a yunnan. I couldn’t place what it was, but it isn’t like most yunnans. Not that I don’t like yunnans, I just don’t love yunnans. I’m really enjoying this. Slightly chocolatey, slightly fruity, a slight pepperiness to it. Very enjoyable!

I had this tea again at work hoping that it would inspire me for a short mad dash to complete a report before the deadline. No such luck. It has all oh the dianhong notes and looks but misses something that would make it special in any way. Also, you have to make very short infusions since it EASILY becomes to concentrated.

The end result is some pleasant sweetness combined with equally pleasant bitterness. It’s just I prefer teas with a defined character. And oh, it is NOT a tea to increase work productivity. Will go and lower my original rating of 88 to something more mundane.

1st-3rd Steep: The wet leaves smell of malt and brown sugar. The 1st steep has a malty flavor matching the smell.

4th-6th Steep: It opens up some more and gets a sweeter flavor. The sweetness is vegetable like. Think carrots or sweet potatoes.

7th & Beyond: I went 10 deep and still had plenty of flavor with no astringency.

Not sure if I can recommend it or not. Fairly interesting tea. But I’ll leave that field blank.

I like this Yunnan Black and down to the last drop of the 2016 I placed an order for the 2017 spring release.

If I like this year’s I will order more.

Light malt and a note of toasted bread transition to a mildly sweet fruitiness that lingers into the aftertaste. While lacking the depth to truly stand out, this tea is fairly enjoyable regardless, smooth and with a medium body.

Well my dear friends, I finally did it! I solo tamed a Quetzal, in theory the hardest of the creatures (other than the Giga, but that is a whole different magnitude of silly) in Ark to tame solo. It is one of the reasons why I just traded for my first Quetzal because it was nightmarish. Having a Quetzal makes taming another Quetzal incredibly easy, you just build a 3×3 platform on the saddle, make a set of walls every other section and carry around ceilings, then you fly your Quetzal under the wild one essentially trapping it, jump onto the platform and add the ceilings, then load that thing up with tranq darts! An unmounted Quetzal will just hover meaning your current tame won’t fall to the ground making it a sitting duck for every predator in the area. Since its torpor drops fairly fast (11 minutes compared to the Rex I tamed yesterday’s hour and a half) you need to be mindful of it rather than watching the surroundings, so being up in the air makes it a piece of cake. Assuming you don’t get knocked off the Quetzal and lose all your gear like I did the first time I tried this trick!

Recently I had a teamergency, aka I ran out of Yunnan hong cha, this caused a panic and an immediate order from Yunnan Sourcing was placed. In the past I used their main site, but this time (what with it being an emergecy) I went with their US site for the lightning fast shipping, one of the teas I got was Wu Liang Hong Mao Feng Yunnan Black Tea Spring 2015, which is what I am looking at today. So, what is the deal with this tea other than it is fuzzy, golden, from Yunnan, and probably an instant favorite? Well, it is grown high in the Wu Liang Mountains of Simao, it is given a special processing making it unique from other Dian Hongs that Yunnan Sourcing offers, and since I consider myself a bit of a hong cha aficionado, let us find out! First off is the ever important vigorous leaf sniffing with hopes that I do not end up inhaling any. The aroma is, well, the aroma can best be described as oomph, a nice noseful of decadent yum. Notes of malt and chocolate blend with sweet potatoes, roasted peanuts, plums, and a distinct note of sweet dried tomatoes that is at one point odd and another insanely delicious. It takes a note I usually associate with savory and twists it to sweet, man this tea smells really good.

I decided to brew this fuzzy lovely in my red rice pattern set, because it is a red tea so thematically appropriate! The aroma of the now soggy leaves is very malty and sweet, notes of molasses, strong chocolate (not cocoa, straight up chocolate!) and pepper blend for a really yummy smelling tea. The aroma of the liquid borders on milky, like chocolate milk with molasses and malt…it kinda reminds me of the cake batter for the Triple Chocolate After Battle Cake I make for Ben, it is decadent and all kinds of sweet. There are a touch of woody and peppery notes and a slight hint of distant fruity as well.

Ok clearly someone is trolling me with this tea, it is too sweet to be real. Seriously smooth with sweet notes of molasses and brown sugar at the start, this moves to rich chocolate (not quite milk but not quite really dark) and black pepper. This then moves to a strong raw honey and a delightful juicy plummy finish that lingers well into the aftertaste.

I wasted no time at all delving into the second steep, the aroma of the liquid is wonderfully sweet, but with an extra heavy malty note making it seem richer somehow…did not know that was possible. The taste, well, I am glad I cannot actually melt from yummy tastes because I would need a new chair after drinking this tea. It starts rich, it middles rich, it ends rich, the mouthfeel is thick which makes it seem even richer. The major note in this tea that lasts through the entire sipping experience is chocolate, sweet and rich, along side that is a strong note of brown sugar at the front and a finish of yams and black pepper. Now when I say pepper I do not mean it has its heat, just the taste, making it quite excellent. The aftertaste has that same plummy note as the first steep, but with added honey.

So. Much.Chocolate! Seriously! The aroma is like smelling chocolate cake batter with strong molasses, this steep also has a bit of yams, it is not as rich as the previous steep but it sweeter which is impressive. The taste is much like the previous steep, but not as rich, it is still strong in the chocolate and malt department but with strong notes of yams and peanuts. This tea is a wonderful red, it has become one of my favorites, especially in the evening. Usually for my morning reds I prefer ones that have a little more potency and less sweetness, but for once I am more awake and have a better head for subtleties in richness this is perfect. I regret only getting 50 grams!

For blogs and photos: http://ramblingbutterflythoughts.blogspot.com/2016/03/yunnan-sourcing-wu-liang-hong-mao-feng.html

Gahhh!! You just sent me scrambling to my cart to add this! I love your blog. :)

I waited like two days too long to get this tea on their website because now they are sold out. sighs Sad times…Oh well…It’s such a good tea, and I’ve enjoyed the sample Terri gave me so much! Wish I could have gotten this tea! :(