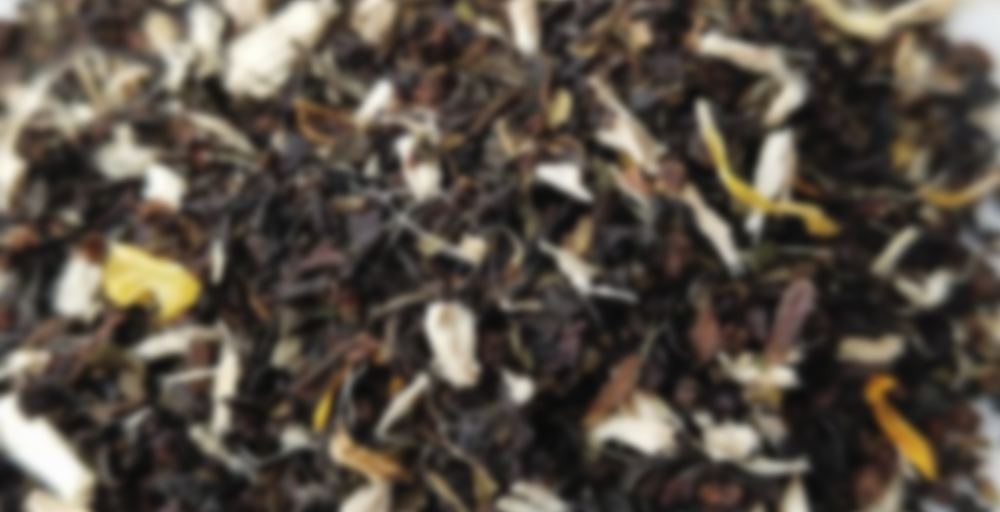 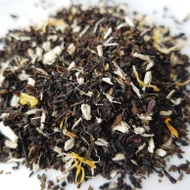 Wake Me Up, Scotty!

I don’t usually go for teas that have already been blended. I usually want to do the blending myself. I also usually don’t go for CTC teas. But this tea presents us with an exception to that – because on a whim, I happened to sample an organic Scottish Breakfast Blend from a would-be supplier and I absolutely loved it. It was rich, rugged and malty and I immediately began to imagine what I might do with this tea.

So I ordered some of the tea to play around with it a bit and while playing around, I thought – hey, it’s a Scottish Breakfast Blend, I should try blending it with butterscotch. Not real creative, I know. But after my initial taste test of the blend flavored with butterscotch – I was hooked. I decided to lighten things up with some soft, creamy marshmallow. And my “Scotty Breakfast Blend” was born. Again – not a really creative name, right?

As I was sitting around with Mat and updating him with my tea studio happenings, he asked me why I called this one “Scotty Breakfast Blend.” And I told him something like: because it was made with a Scottish Breakfast Blend and I used ButterSCOTCH as the primary flavor component.

He mentioned I should call it “McBreakfast Blend” or something like that. Then I thought, what if McDonalds decides to slap a Cease and Desist on me for using their Mc. He told me that he didn’t think they could actually do that and they probably don’t lay claim to the prefix Mc. However, I wasn’t too keen on McBreakfast Blend … what about O’Scotty Breakfast Blend? During this exchange, I’m not sure who threw in “Beam Me Up, Scotty” into the mix . . . but I liked it. Not because I’m a big Star Trek fan because really, I’m not. I’m much more Harry Potter than Star Trek although I really liked Ricardo Montalbán’s portrayal as Khan.

I liked the idea that – for those of us who like to see different meanings in words – the “Beam Me Up” could be thought of as waking someone up or inspiring a sense of alertness which is what black tea (especially a rich CTC blend like this) does for me. At the end of my exchange with Mat, he said, just call it “Wake Me Up, Scotty!” because those who are Star Trek fans will appreciate the alluding to “Beam Me Up” without actually saying that – and those who wouldn’t get what I’m alluding to might still appreciate that this is a wake-me-up kind of tea with a Scottish Breakfast Blend base and a butterscotch flavor.

This a well-rounded black tea that on it’s own is pretty robust and stimulating – a fantastic first tea of the morning! The butterscotch and hint of marshmallow offer a pleasant sweetness to the cup. A delightful cuppa!

Wake Me Up Before You Go-Go

Another new-to-me tea blend! I’m so glad Shae included steeping instructions, because even after only 2 1/2 minutes, this one steeped up STRONG! Like most Scottish Breakfast teas I’ve tried, this is a brisk and aggressive CTC black tea that can be a bit astringent on its own but mellows out nicely with a splash of milk. I don’t really get any marshmallow flavor, but the butterscotch does come through. It’s not strong, but a pleasant accompaniment to the base tea….more of a breakfast blend with benefits than a true dessert tea, if that makes sense. Not sure this is something I’d repurchase, but I’ll happily finish the generous sample Shae sent me!

That’s a shame about the marshmallow, but the butterscotch sounds amazing. This is one I actually haven’t tried yet, but I might have to have a cup soon. It sounds like something I would love.

Thanks for sharing! It’s so fun getting to try a bunch of new stuff this month. :)

Drank this one during lunch on one of the days this week; I eat with the people from IT a lot just because they’re probably the (stereotypical or not) most “nerdy” group in our office building – and while I adore the people I work with in the tea department they’re definitely not the nerdy/geeky type folk I’m used to being surrounded by (more foodies/tea people or artistic types – which are also my kinda people, but in a different way). Sometimes I just need to sit for an hour with people and discuss the new Galarian forms of Pokemon in depth…

Anyway; all that to say that they were VERY interested in this tea on the day that I brought it in. They work for a tea company, so it’s not like they don’t enjoy tea – but it’s not really the “be all and end all” for any of them; but a Star Trek inspired tea!? That shit was mind blowing for them. It was a really cool way, for me, to kind of share a thing I really love in a way that spoke more to them too. Gotta spread the tea love however you can!

By the name I assume it contains load of caffeine :D

I took inventory of my teas and grabbed this out with plans of gong fu brewing it tbh. However, I had less than 2g of the tea so I went with Western brewing in a small mug instead.

It cooled because my smaller mugs are shallow and wide so I am sipping it now and remembering it is not my favorite. The CTC makes for a more dry tea with the caramel being less sweet and more dark. I want more sweet and less astringent but that’s not what I got.

Thank you Sil for the sample. This tea did catch my attention so it is nice to know I wasn’t missing out on my next favorite by not buying it.

I’ve had this a few times off and on this week and i still can’t decide how i feel about it. It’s not a bad tea, don’t get me wrong, but it more often than not comes across as a regular sort of black marshmallow root tea. I’m not gettting a lot of caramel or butterscotch.

Maybe adding milk wasn’t a good idea for a shorter steep. I got lots of malt and vanilla, but nothing in the marshmallow or caramel categories. I’m going to try this again before I rate it, I expect this is a case of user error. At least there was no sour or bitter flavours.

doh. this was one i was thinking about buying

I can’t believe I never reviewed this when it was around! Ive been thinking about this tea lately, because it was SO yummy. I miss it :( I hope it makes a return someday. The butterscotch, vanilla, and marshmallow flavors definitely came through. The black tea used was bold, I personally would request a lighter variety so that the flavors could come out even more- but either way it was great. I hope I get a chance to taste it again someday!

I recently bought three taster packs of this tea, one for me, one for a friend deployed in Iraq, and one for his wife here at home. Months ago we had a tea party at church and he stopped in.I had brought a number of teas, but he immediately identified 52 Teas’ black Pancake Breakfast as his favorite. He is a HUGE Star Trek fan as well as being a tea drinker, so thought I would surprise him with a treat.

I made myself a cup of this. I like tend to like breakfast teas that are robust but not bitter. I thought this might be a little more dessert-y than robust, but it’s not. The black base is strong enough to hold its own against the marshmallow and butterscotch, like a good breakfast tea should, but there is a bit of creamy almost-sweetness to the sip. Very nice.

The dry leaf smells exactly like butterscotch, but, once steeped, I get a very faint butterscotch flavor at the very beginning of each sip. It tastes primarily of caramel and marshmallow to my taste buds, and, while that’s not a bad thing, I was just hoping for more butterscotch flavor. In fact, it reminds me of a 52teas blend I tried last year – Sweet Caramel O’Mine. Imagine that tea with the addition of marshmallow root. I find that the base is quite tasty despite being CTC instead of whole leaves. All in all, not a bad cuppa. It’s not something I feel compelled to repurchase (my wallet is very happy about that), but I will happily sip down the rest.

While I definitely notice the flavorings, to me this comes across as a black tea first and foremost, with backup voices from the caramel and marshmallow, as opposed to a flavored tea, where the base usually gets the supporting role (does this make sense? I hope it makes sense). It all comes together very nicely, the marshmallow smoothing out the CTC and the caramel giving it extra richness. It doesn’t really taste like Nina’s Paris’ Je t’aime (before that went downhill), but it reminds me of the concept, and it makes a great morning cup.